Castle Stalker – in the Gaelic, Stalcaire, meaning Hunter or Falconer – is believed originally to have been the site of a Fortalice (a small fortified building) belonging to the MacDougalls when they were Lords of Lorn, and built around 1320. The MacDougalls lost their title after their defeat by King Bruce at Brander Pass in 1308 but regained it for a period after 1328. In about 1388 the Lordship of Lorn passed to the Stewarts, the lands including Castle Stalker.

It is believed that Castle Stalker, much in its present form, was built by the then Lord of Lorn, Sir John Stewart, who had an illegitimate son in 1446, and it is reasonable to suppose that he built and occupied the Castle about that time. In 1463 Sir John Stewart was keen to legitimise his son by getting married to his Mother, a MacLaren, at Dunstaffnage when he was murdered outside the church by Alan MacCoul, a renegade MacDougall, although he survived long enough to complete the marriage and legitimise his son, Dugald, who became the First Chief of Appin. The Stewarts had their revenge on MacCoul at the Battle of Stalc in 1468 opposite the Castle when the Stewarts and MacLaren together defeated the MacDougalls, and Alan MacCoul was killed by Dugald himself. The site of this Battle is marked by a memorial stone in the Churchyard in Portnacroish.

In 1497 the Stewarts and MacLarens carried out a combined raid against MacDonald of Keppoch as a reprisal for cattle reiving, but Dugald Stewart was killed and succeeded as Chief of Appin by his son Duncan. King James IV of Scotland, born in 1473, was a cousin of the Stewarts of Appin and when he came of age made frequent hunting journeys to the Highlands. It is understood that he stayed quite often at Castle Stalker, using it as a base for hunting and hawking for which he had a passion. It is thought that further improvements were made to the Castle at this time including the possible addition of what is now the top floor and roof, and that the Coat of Arms over the front door may be the Royal Arms of that time.

Duncan Stewart was murdered by the McLeans at Duart Castle in 1512 and succeeded by his younger brother Alan Stewart as the third Chief. In 1513 the Stewarts of Appin supported King James IV at the Battle of Flodden. The Stewart Chief and is five sons were all present at the Battle but all managed to survive what was otherwise a massive defeat in which the King was killed.

In 1520 Sir Alexander Stewart of Invernahyle was fishing off the small island next to Castle Stalker when he was surprised and murdered by a party of Campbells. Tradition has it that the nurse of his baby son, Donald Stewart, hid the baby in the Castle and when the Campbells left the nurse returned, found the baby still alive and took refuge in Morven. 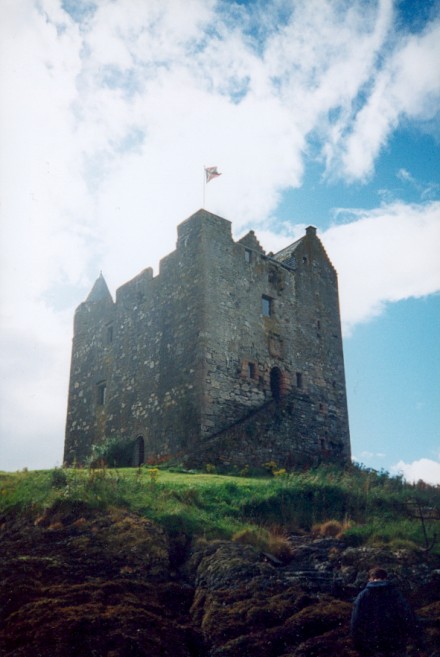 Young Donald became renowned for his strength and was known as “Donald of the Hammers” – in the Gaelic “Donald nan Ord” – as he could wield a blacksmith’s hammer in each hand with ease. In 1544 he raised the Stewarts of Appin and went to Dunstaffnage where they killed nine Campbells in revenge for the murder of his Father. Donald nan Ord also led the Stewarts at the Battle of Pinkie on the 10th September 1547. He died in 1607 and is buried on Lismore where his faithful henchman, a Carmichael, also lies buried.

In around 1620 the Castle passed into the hands of the Campbells of Airds as a result of a drunken wager by the 7th Stewart Chief, Duncan, in exchange for an eight-oared wherry.

The Stewarts of Appin, under Stewart if Ardsheal, regained the Castle in 1689 when they came out with King James VII (otherwise James II) against King William but after defeat at the battle of Dunkeld the Castle was again forfeited to the Campbells. The Stewarts under Ardsheal refused to hand it over when it was then besieged by the Campbells for several months until Ardsheal was granted an honourable surrender in 1690.

At the time of the 1745 Rising Castle Stalker was held by the Campbells with a Garrison of about 59 Government troops. Although the Stewarts of Appin were solidly behind Prince Charles, and raised a regiment of 300, the Castle was too strong for them to take and their 2lb cannon-balls merely bounced off the walls. The Castle formed an important link during the rising with ships calling frequently with men and supplies as they sailed between Inverary in the South and Fort William in the North. After the Battle of Culloden in 1746 the Castle was used by the Government forces as a local centre where the Clansmen had to surrender their arms. Six prisoners are recorded as being held in the Prisoners’ Hole for about a fortnight before being taken to Edinburgh for trial.

The last Campbell was born in the Castle in 1775 and Campbells continued to reside in it until about 1800 when they built a new house on the mainland at Airds, which still exists today, and the Castle remained merely as a storehouse. In about 1840 the roof either fell in or was perhaps removed to avoid roof-tax and the Castle was abandoned.

In 1908 the Castle was regained from the Campbells by Charles Stewart of Achara who purchased it and carried out some basic preservation work to stem its decay.

In 1947 his successor, Duncan Stewart, who was Governor of Sarawak, was murdered by a Dyak and the Castle devolved on his widow. In 1965 Lt. Col. D. R. Stewart Allward negotiated terms for the purchase of the Castle and spent the next ten years rebuilding and restoring it as it is today. It is now fully habitable. Contractors and builders in the normal sense were not employed in the restoration which was carried out by Lt. Col. Stewart Allward personally with the help of his wife, family and many friends who were willing to spend holidays and long weekends helping with the task.

Lt. Col. Stewart Allward died suddenly whilst out walking on the 5th February 1991.  His wife Marion, always of great support to him, died on the 7th July 2005.  They are survived by their four children, Sine, Ross, Alasdair and Morag, six grandchildren and nine great-grandchildren.